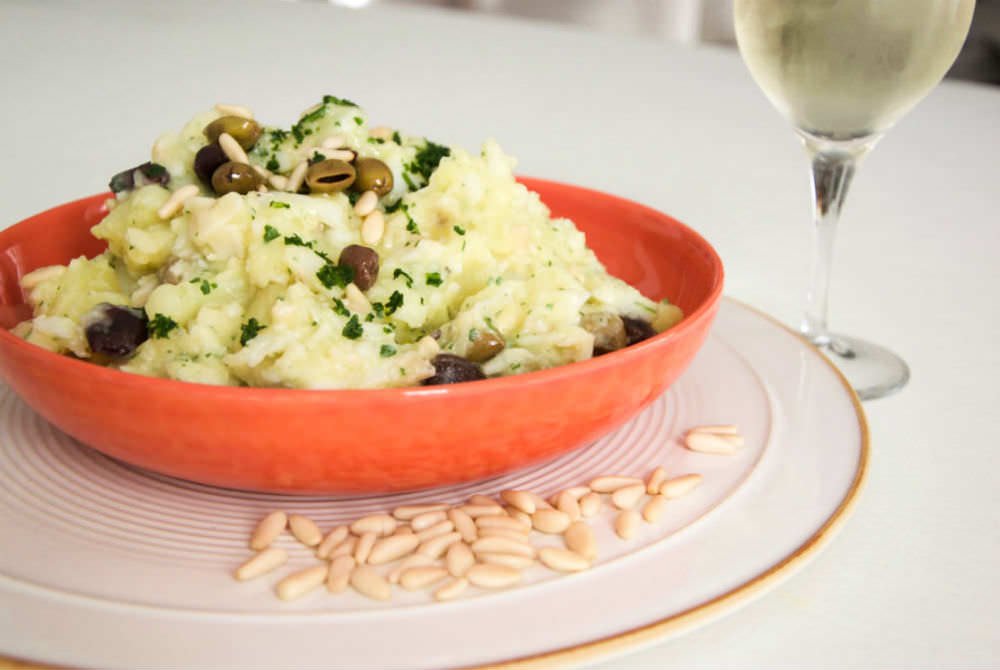 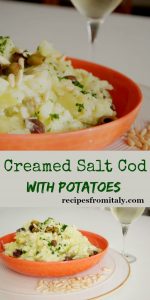 Creamed Salt Cod with Potatoes (Baccalà Mantecato con Patate) is a very tasty and simple dish. It’s a typical recipe of traditional Ligurian cuisine, in particular of the geographical area of Imperia. In Italy you can taste creamed salt cod in every restaurant near Imperia area as an hors d’oeuvre or as a main course.

Creamed Salt Cod with Potatoes recipe has very ancient origins. For many years it was the main dish of Ligurian sailors who spent long periods on seas. The reason was because quite all the ingredients of this easy recipe (salt cod, potatoes, oil) were fairly easy to find and keep for a long time (and cheap, why not).

The Ligurian dialect name of this dish is “brandacujun”. If you will find this name in a Ligurian restaurant menu, you will know that they are talking about Creamed Salt Cod with Potatoes! Try this recipe at home. It would be great for your parties! 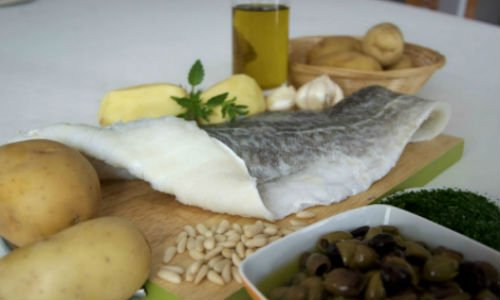 The most important thing before you begin to make creamed sal cod with potatoes recipe is to let the salt cod soak in fresh water for 48 hours, changing the water two or three times a day (1). In this way the fish loses a large part of the salt. When ready, boil the codfish, without adding salt, for about 20 minutes (2). Meanwhile, in a large pot, boil potatoes, previously cutted into pieces, into saltless water (3).

After about 20 minutes, remove the codfish from the cooking water and start to remove the skin and bones (4) (5). Now drain the potatoes and place them into a bowl. Add the salt cod and mix with a wooden spoon, breaking and chopping up the codfish into large pieces (6). 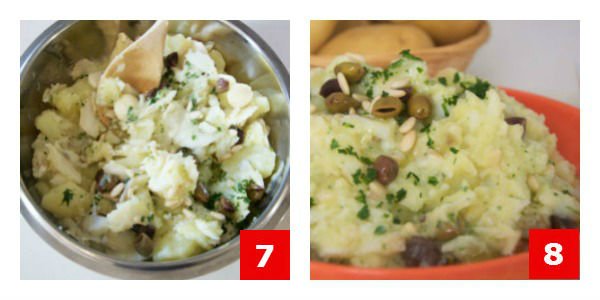 Then add one by one the remaining ingredients (olives, parsley, pine nuts and garlic). Stir, adding plenty extra virgin olive oil to make a creamy mixture (7). Do not forget to remove garlic before serving Creamed Salt Cod with Potatoes. Garnish with some olives and pine nuts. Serve this dish warm or cold, as an appetizer or as a main course (8).

Brandacujun is certainly a typical dish with a strange name. As mentioned above, it’s a Ligurian dialect word which indicates creamed salt cod with potatoes recipe.

There are many legends about the origin of the name Brandacujun.

The origin and meaning of the first part of the name is more certain. In fact, “branda” comes from the Provençal word “brandare” meaning “to shake/to whip”. Famous is the French brandade de morue recipe that literally means Whipped Salt Cod even called Salt cod Brandade. On the other hand, the Italian region of Liguria borders with France, thus influencing each other.

But the second part is the one that most of all has fueled speculation and stories.

Some say that the task of shaking the pan to mix the fish and the potatoes were entrusted to the “Cujun” of the group, that is the least clever of the family because he did not or could not do anything else. In short, a bad word that means “stupid”. Others say that shaking-the-pot task was instead entrusted to the man of the house who, shaking the pot from the sitting position (with the pot between his legs), made it “come to terms” with their “nether regions” (cujuni in Ligurian dialect).

No Replies to "Creamed Salt Cod with Potatoes"

How To Cook Risotto. 10 Tips for a Perfect Risotto